Understanding the human body’s response to various forms of sugar is the single most important aspect to gaining control of your metabolism.  Gaining control of your metabolism is the single most important aspect of getting results.  By doing this anyone can get great results from a health standpoint and an aesthetic standpoint.   In my nutrition coaching practice I get more questions about sugar than anything else.  It seems to be the hardest thing for people to understand as well as control their consumption of.  In the following series of posts I will attempt to explain to common questions I get about sugar as well as offer some strategies around consumption.  This post will focus on Glucose and which foods have glucose.

To most people Sugar seems completely unavoidable.  I know for me growing up it certainly was.  I grew up to be a classic sugar addict.  I would go to great lengths to ensure I had my daily fix of candy.  My family didn’t have a lot of money when I was growing up.   I would forage around the neighborhood collecting cans like a hobo.  Once I had 20 cans each calling for a 5 cent deposit, I would return them and I would get a dollar.  Next I would take my hard earned cash and load up on penny candies from the local Dari-Mart.   The subsequent binges were legendary.  I would ball up all of the Tootsie rolls and eat them like an apple.  The feeding frenzy would continue until the candy ran out or I was sick to my stomach.  Usually I would chase all of that down with a glass of milk, lay flat on the floor for a while then get up and run around like a crazy person.   This was of earning money to buy candy taught me a valuable lesson.  This is how I initially learned that it’s necessary to work hard to get what you want.  At the same time this grew into a nasty habit.  Fortunately for me athletics have always been a huge part of my life and the sugar consumption never led to weight gain.  I can tell you though I had major blood sugar disregulation.  If I didn’t get my fix I became difficult to be around.   Recently I fixed my diet and my blood sugar regulation has improved drastically.

In America we eat a ton of sugar.  My story is not very unique.   At this point it’s kind of like pick your poison.  Some people prefer Soda while others enjoy pastries.  Many people get their fix from Starbucks.  There are many forms that people indulge in sugar, most of them behave in the body in pretty similar ways.  Wreaking havoc on metabolism, mood and brain function.  Contrary to what the majority of people have been led to believe, the truth is humans do not need to consume exogenous sugars in order to survive.  Yes the brain uses glucose as a source for fuel and yes high intensity exercise requires glucose, but for the majority of the population the human body can safely manage glucose needs in the body without having consumed any glucose or any other form of carbs in fact.  It takes a few more steps metabolically, but trust me it can be done.  There are hundreds of thousand of people that virtually never consume any carbohydrate in order to make glucose.   I don’t necessarily advocate this approach, but many people do it and flourish.  So how does this work?  Why have many nutritionist and even the US government been telling everyone sugar is completely necessary when it is not?  Probably because it is cheaper and easier and companies can see enormous profits by selling sugar laden items.   By some metrics cheap and easy can be considered better, but from the standpoint of health that is not necessarily true.  Just look at the poor health of this nation and you will see the results of eating cheap and easy food.

When we eat food, it always comes in a form that is not immediately usable by humans.  We have to break that food down by a process called digestion in order to send it into our bloodstream or liver to be processed.   Then the magic of metabolism happens.  There probably is no topic more confusing and complex as human metabolism.  Even top scientists do not know exactly how it works.  There are some basic aspects that are important to understand if you are interested in taking control of your health.   This series of blog posts will focus on the various types of sugar and how they are metabolized.  I will also explain how we create glucose from the stored from glycogen in our cells and from fat stores in our body all the time.  And of course the most important part, which is I will tell you how take advantage of that process in order to access your desired outcome.  More and more science is leading towards the chronic over consumption of sugar as the leading cause and of disease.  Also, chronic over consumption of sugar will often exacerbate other diseases.  If you have made it this far that is great!

Lets take a look at Glucose and some common foods that contain glucose:

Glucose can be found in rice, bread, various pastries, pasta and sweets.  The percentage glucose of the total carbohydrate in any given item varies depending on the source.  What that means is in many foods you eat will have multiple types of carbohydrate in each item including simple sugars, starches and cellulose.   These types vary depending on the molecular structure.  The molecular structure of the carbohydrate will determine it’s digestion rate, thus it’s impact on your blood sugar.  Still with me?  The important thing to know is the more of the carbohydrate that is in a simple form (glucose) the more detriment that will have in general.  Bread can range from 0 to 15 percent glucose.  A typical piece of bread contains about 24 grams of carbohydrate.  That is about 5 grams of sugar.  Multiply that by 2 and you have 10 grams of sugar that are going to contribute to the overall glycemic load of any given meal.  In a given meal it is ideal to avoid consuming over 24 total grams of simple sugars.  This way you can keep your blood sugar down and have a lower insulin response.  Glycemic load is what will determine the impact on blood sugar and thus the insulin response. Read my post 6 reasons to cycle carbs then you will understand the importance of managing insulin.  Certain bread contains high fructose corn syrup as well.    In lower quality bread there is virtually no fiber, which can decrease the release and subsequent absorption rate of any sugar in the small intestine.  The majority of bread is a perfect storm of high sugar and low fiber, thus making bread virtually useless and extremely harmful.  Gluten has gotten a ton of attention lately, but it is not the only reason to avoid bread.  If you must eat bread the best choice from the perspective of the sugar impact is whole grain bread.  Even then you have to navigate all the toxins in bread that most people are allergic to or have an immune response to.  Including, but not limited to wheat germ agglutinin and lectin.  For more information on this check out this great article I found on the dangers of bread.   I could go on for 10,000 more words about why eating bread is probably not a good decision.  I will not.  At this time it is more prudent to move on to the other items. 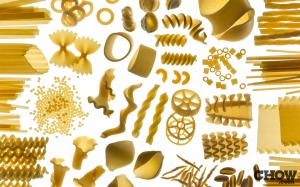 For all of the ways to ingest Carbohydrate Pasta is close to the healthiest.   Pasta is considered a low glycemic index form of carbohydrate, but that is not necessarily true.  Most pasta is not made from whole grain it is made from refined flour.  When cooked the starch breaks down further and acts similar to glucose spiking the blood sugar.  This is why if you eat a plate of pasta you will likely not feel full and be very hungry in about two hours.  The other problem with pasta is the volume that is generally consumed.  Makes the glycemic load of most pasta meals rather high because servings of pasta tend to be large.  A good rule of thumb if you are going to eat carbohydrate is to take in less that 50 grams per meal total.  3 ounces of pasta has 48 grams of carbohydrate.  Most people are eating about a cup of pasta at a time that is a staggering 150g.  For those who are interested in being healthy and losing weight, that 150g would pretty much exceed their daily allowance of carbohydrate.

How about those tasty pastries and donuts? 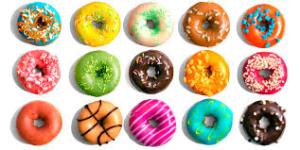 Well those are basically simple sugar all the way and should be avoided even more that bread and pasta.  Bread, pasta and pastries disguise themselves as food, but they for the most part are the same as soda or candy.  They offer virtually no health benefit and actually cause harm in most people.

Glucose is also found in Rice

Rice is probably the safest way to consume glucose.  White rice will cause an insulin response, but it is clean of all of the toxic proteins that flour has. When combined with a balanced meal including fat and fiber white rice shouldn’t be a problem huge problem especially in the evening.  That is of course if you eat less than one cup cooked.

Bread, pasta, pastries and rice are the largest source of glucose in most diets.  Glucose is pretty much what all of the sugar you consume ends up as, but the closer a carbohydrate eaten is to Glucose, the greater the impact on blood sugar and subsequent insulin response.  The key to manipulating weight is controlling insulin, therefor great care and consideration should be taken when consuming glucose containing items.  Complete avoidance is not necessary.  If you are a highly active athlete your best bet for re-fueling post workout will be consuming some glucose.   With that being said, the average person consumes way too much glucose.   There is also a lot of debate on the efficacy and need for glucose pre-workout.  I personally do not consume sugar before exercise and will only introduce exogenous glucose in exercise bouts exceeding 1 hour.  Ingestion of glucose pre workout will actually stiphen release of intramuscular muscle glycogen and oxidation of free fatty acids (FFA).  This can be a marginal factor for an athlete, but can be a massive dynamic if the objective is weight loss for two reasons:

First the more glycogen you burn, the more room you have to place future carbs you eat.  That is important for all of the people that like to eat high sugar food.

Second of course, if you are trying to lose fat it’s ideal to oxidize FFA not circulating blood glucose!  I don’t want to dig in on this too far on this post.  The bottom line is we have been essentially tricked by Gatorade and other sugar drink companies about how much sugar we have to consume in order to perform at a high level in the gym or on the field for short durations.   At any rate I digress.  I hope you have learned more about glucose.

The next post I will attempt to cover the infamous and highly controversial Fructose.

One thought on “The skinny on Carbohydrate part 1: Glucose”